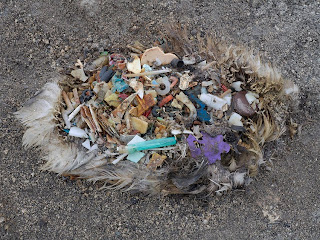 Not long after I began Seeding the Cloud i came across these images depicting the skeletal remains of Laysan albatross chicks who fed on a diet of plastic starve to death.(Copyright Chris Jordan images from the series titled Midway: Message from the Gyre2009 http://www.chrisjordan.com/gallery/midway/#CF000313%2018x24) After the soft tissue decomposes the remaining bones and feathers of the chicks frame a pile of ingested plastic fragments. These images were taken at the Marine and Wildlife Park on Midway Atoll, a small land mass in the North Pacific Ocean located in an area where oceans converge known as the North Pacific Gyre or Convergence Zone. Petroleum based plastics are insoluble and create a toxic marine pollutant. Initially they concentrate in the pelagic zone (floating near the surface) and mimic in colour and size wildlife food sources thus undermining the viability of many marine and bird species known to feed in the area. The loss of generations of Albatross is a direct result of human action and inaction – their death primarily a result of poor waste management and a lack of public interest/imagination in establishing counteractive measures. This environmental problem occurs in international waters and current political inaction is a direct result of out of sight out of mind. 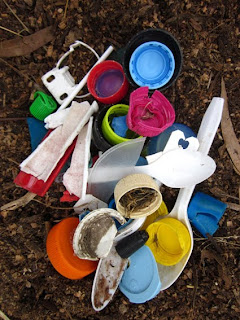 When I view these images there is evidence of a collection process that while it occurs at the other end of the moral spectrum in a perverse way reflects something of my own. Obviously there is a differing and more tragic outcome but as I collect and process the fragments of plastic I have a sense of connection to an event or issue that extends well beyond myself. 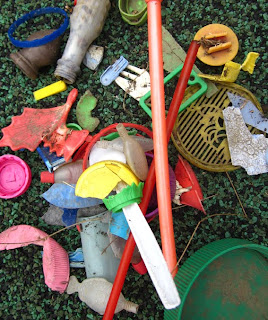 Posted by roseanne bartley at 8:51 PM